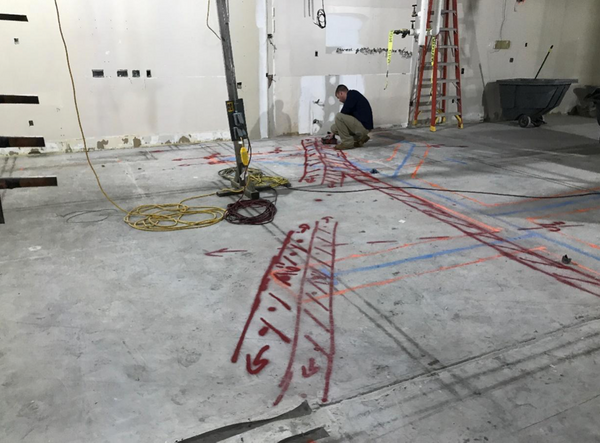 Ground Penetrating Radar Systems (GPRS) was requested to come on site by a general contractor to perform a Ground Penetrating Radar (GPR) investigation at a hospital that is preparing to have a brand new room put inside of the west wing of the building on the ground floor. The contractor is needing to saw cut several trenches to install new drain lines and electrical/communication conduits running through the renovation area. The contractor needed to know if there were any conduits or potential problematic areas to avoid when saw cutting through the concrete. These major problems could severely risk the safety of employees if not found prior to using a saw. GPRS located multiple electrical conduits that were in, and just below, the concrete slab that could have been easily saw cut through if the blade were set too deep by the worker performing the cutting. The conduits were marked on the surface with red spray paint, and also included depth indications so that the contractor could safely saw cut over or around them without hitting the conduits.

Also, just to be even more specific for the contractor, conduits that were found to be live were marked with solid edges on the surface, and conduits that were found to be cut off and abandoned were marked with dashed lines. All conduits should be avoided at all times regardless, but this gives even more notice for the contractor to be aware of findings and have an even higher comfort level when beginning saw cutting. GPRS also was able to locate a majority of the drain lines running under the slab as well and marked those with green spray paint to make sure the general contractor knows how to differentiate between findings.

The site contact had some knowledge of the utilities found to be existing in (and underneath) the slab, but their location was only guessed and assumed until GPRS came on site. Without having GPRS on site there could have been serious damage to the existing electrical and drain lines. Minimizing risks should always be a top priority of all companies, and GPRS aims to assist in that goal for every client we work for. Before you saw cut or core drill, call GPRS to know what’s underground!

The pictures here show the findings in red and green, with specific depths, along with the contractor’s mapped out saw cutting trench in orange and blue.